Jamie and Libby learnt all about the history behind the Medals at the Olympic Games. Here are some pictures of the posters they made with all the information that they learnt. 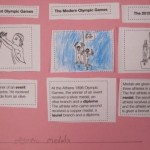 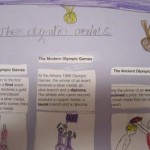 They also made a short movie using puppets to tell the story of the history of the medals at the Olympic Games.

One of our students was interested in learning about the Football Tournament that is played as part of the Olympic games. We found out that the matches are usually played in a city some distance from the host city i.e. London. We did a bit of research on each of the stadiums and found out some  information on them.

Its trophy room has all of the major honors that United have won since 1908. Aon and Nike sponsor Manchester  United.

The club was formed  in 1892. Newcastle city crest is similar to the club crest.

The last time London hosted the Olympic Games was in 1948, when the Games resumed after a 12 year hiatus due to World War 2. Wembley Stadium will host preliminary matches, quarter-finals, semi-final and finals for both the male and female Football Tournament.

This is a photo of our Notice Board which contains information on The Olympics Past and Present. 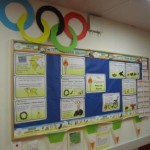 What do you think of the Olympic Rings that we made?

Here is a photograph of our Word Wall which contains all our topic words about the Olympics. 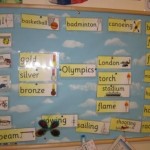 Lily found out lots of information all about The Olympic Rings: