Winter is here! Here in Beaumont Hospital School we are using Winter as inspiration for some poems and stories.

It was heavily snowing and Francis was in her house looking out the window. She was wishing she was on holidays under the sun. Francis was not allowed out to play because the snow was coming down franticly. Suddenly Francis saw a star in the sky. She noticed that it was getting bigger. Before long she could make out a figure flying towards. It was a glamorous Fairy. The Fairy said that she could grant her three wishes. Francis was extremely excited about the wishes. She wished that she was on a Treasure Island.

Francis felt the warm sun on her skin she opened her eyes and saw a wizard. She was surprised to find such a nice wizard on a Treasure Island. Francis started to talk to the wizard. He told her that a ninja took his magic wand and he can’t find it anywhere. Francis decided that she would help the wizard. Francis opened her backpack and took out a crystal ball. Francis and the wizard peered into the crystal ball. They could see where the ninja had taken the wand. It was behind a huge, magnificent waterfall.

Francis and the wizard finally reach the waterfall. But there was an angry pirate stopping them from going any further. The pirate was angry because he had lost his key to his treasure chest. Francis opens her backpack again and took out a map. It showed her where the key was. She took four steps and took a left. She looked up on a Palm tree and she could see the key glinting in the sun. The wizard came over and helped Francis knock the key off the Palm tree. Francis and the wizard returned to the pirate with the key. The pirate snatched the key out of Francis’ hand and ran away with it.

Francis thought that they could never climb up the waterfall and find the magic wand because it was too dangerous. She turned around to the wizard. He was looking down at the map. The wizard had found another way into the cave behind the waterfall. They set off on their climb. The wizard was really excited when he found his wand. Francis could hear the ninja coming. The wizard grabbed her and said “hocus pocus” before long they were at the beach again.

The wizard thanked Francis and returned to his home. Francis started to stroll down the beach. She could see a gigantic blue object in the distance. As she got nearer she noticed that it had four disgusting yellow eyes and that the ground started to shake as it got close. Francis was feeling blue. She just wanted to get home in time for Santa that she wasn’t scared by the monster. The monster asked Francis where she was going. Francis explained about the Fairy. The monster who was called Egor told Francis that she shouldn’t be upset because the Fairy just lived around the corner. Egor said that he could bring her there if she liked. Francis said “yes please” and they went to the little mushroom house.

Francis knocked on the tiny door. It opened and standing behind it was the beautiful Fairy. The Fairy asked her “what is wrong Francis?” and she said that she wanted to go home. The Fairy flew up beside her and held her hand. Francis said “goodbye” to Egor and within no time she was at home. Before the Fairy went Francis said “wait I still have one more wish, I want a great Christmas for me and my family.” The Fairy smiled and said “no problem.” With a wave of her magic wand she was gone. Francis fell fast asleep and dreamt about her fantastic adventure.

The Witch and The Supergirl

There once was a girl named Caitlin. One day she left the house. She went to a Forest. Caitlin met a bad witch who trapped her in the castle in the forest. Then Supergirl poured water on the witch. Caitlin escapes and goes to the princess castle.

We had our Christmas party on the ward for all the children. Here in the school we made some lovely wall murals to decorate the party. 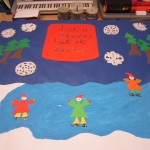 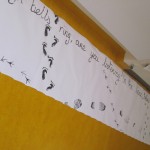 Walking in a Winter Wonderland….

Even our Savannah animals are getting into the Christmas Spirit! 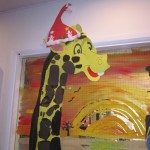 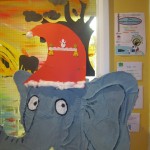 Aoife wrote an Acrostic poem about Christmas while she was in Beaumont Hospital School.

Milk left out for him

And some sweets too. 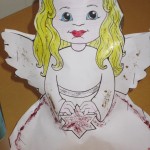 “2 Santas multiplied by 3 Santas gives you how many Santas?” 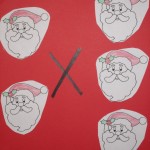 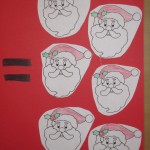 While Meg was in Beaumont Hospital School she made a snow man out of clay. What do you think of the detail in his scarf? 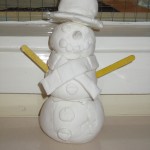 Tomorrow when the clay has dried we will paint him!