Karl wrote a great Halloween story while he was in Beaumont Hospital School.

Jack and Jill went up the hill

One Halloween, Jack and Jill went up the hill to the haunted house. They went there to trick or treat. On the way up there was a scary carved pumpkin. The brother and sister were getting nervous. Leading up to the house they saw a black cat racing by, and in the window they saw a skeleton. They heard in the distance the wail of a terrified girl.

As they approached the house they could see the dragon like door knocker. As they lifted the head of the dragon it made a creaking noise as if nobody had used it for years. When they released it the silence was shattered by the boom of the knocker.

The door creaked open slowly. As they entered the house cautiously they saw the skeleton swinging from the rafters.

“WHO GOES THERE?” a voice boomed. Jack and Jill shivered in their boots. A dim light appeared at the top of the  stairs. A tall thin figure was silhouetted against the light.

“Hello” Jack and Jill whispered together.

“Oh thank God I haven’t gone mad, “ sighed the figure. As he came down the stairs he diminished in size until finally he reached the bottom of the stairs and he was four feet tall!

Why don’t you have a go writing your own Halloween story now?

We were painting some Halloween inspired paintings here in school. By blending only the primary colours, red, yellow and blue we made some lovely sunset backgrounds. 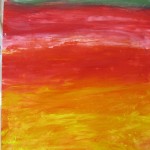 Then using black sugar paper we made some scary castles, cats, witches, bats, trees and skeletons to add to our pictures.

This is Kerrie’s painting. 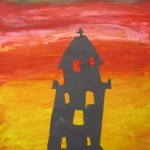 This one was done by Sadie. 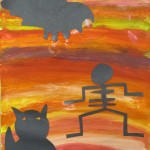 Aoibhe made the final picture. 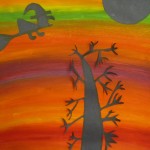 Kerrie wrote an Acrostic poem all about Halloween. The first letter of each sentence spells out the word HALLOWEEN.

ALL THE CHILDREN TRICK OR TREAT

LIGHT UP THE SKY

EATING SWEETS IN THE

In the school we are making some Halloween puppets. We have a Witch and a Ghost so far. 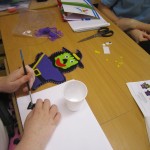 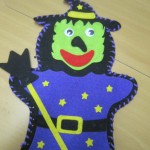 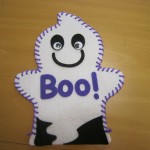 Rían wrote another Halloween poem for us all about Skeletons at Halloween.

Every year at Halloween 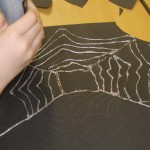 Spider web under construction by Rían. 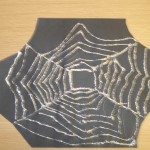 Rían wrote an interesting recipe. Would you like a slice of his cake?

1. Squash everything in a cauldron.

4. Stand on your left arm and mix with your right arm.

5. Put it under the floor for a century.

6. Then get it and enjoy the monstrous Frog Eyed Cake.

to give you a hand

if you needed to stand

And a lemur’s tail

This spell makes sure you won’t

Handy if you’ve been in trouble

Take a spoon of snail slime

But sometimes I scream

I wish there was a spell, so the test would seem a lot

Easier; so I put a snail and a horse femur and a tail  of lemur

A wing of an eagle,

But when Friday arrives,

The test it begins

The spell to make the world freeze but who ever says it would stay awake.

Get a horse’s head

And say the magic words

Aoibhe moulded quick drying air clay into a pumpkin, she used a lolly pop stick to take out some clay to make the eyes and mouth. 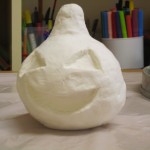 We let it dry over night and painted it in class. A very happy looking pumpkin! 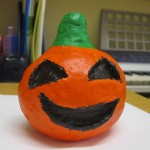 Rían and Michael composed some scary music to accompany a Spooky Spell Michael wrote. Listen to it here: Halloween Composition

I took a photo of our Halloween Noticeboard. It displays some of the children’s work for Halloween. Anyone who comes onto St. Raphael’s can admire all the hard work that the children are doing in school. 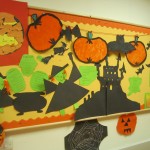 What do you think of the design on our pumpkin? Do you know what animal it is? 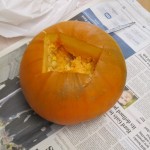 Step 2: Align the template on the pumkin. 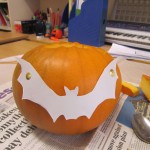 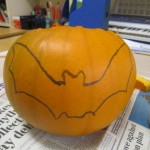 Step 4: Cut out the animal. 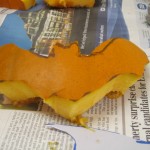 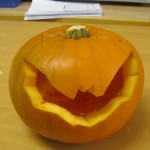